As a designer, you should always know what you want the player to do, but just because you know what the player should be doing doesn’t mean that they do.

Navigation can become an issue even in relatively small games, so effective signposting becomes an essential skill for all designers. As tempting as it may be to begin development by creating amazing graphics and set-pieces, a better starting point would be to decide what you want the player to do in an environment and the route you want them to take through it. 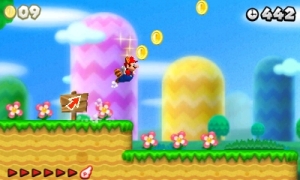 New Super Mario Bros. 2 takes signposting very literally, as shown in the screenshot above. But even without the big red arrow there is another form of signposting in the shot. The placement of the coins draws the player’s eye up, and suggests that there is a reward for following that line. Sure enough, if a player uses the super leaf and flies up in that direction, they will find a hidden star coin.

There are plenty of ways to help guide the player, such as:

UI – Even if your game is primarily UI based, you should still know which buttons you want the player to press. If you have a particular button that you want a player to click, make it stand out more than the others. Make it bigger, more colourful or add a visual effect. If you’ve played any social games before you’ll have noticed that the ‘SHARE’ button is more often than not the most obvious, and that you have to hunt for the tiny close button.

Maps – Most commonly used in sandbox games with big centralised hubs, maps are a great way to show a player where the next objective is. Use different icons to differentiate between different targets, though be mindful to avoid overloading the player.

Landmarks – By putting an interesting looking building on the horizon, players are likely to want to investigate it, especially if used in conjunction with other techniques such as NPC characters…

NPC Characters – Characters within the game can interact directly with the player, sending them on a quest or opening up a new area of the game. They can also be context sensitive so that if a player has appeared lost for a while they can give more detailed instructions. 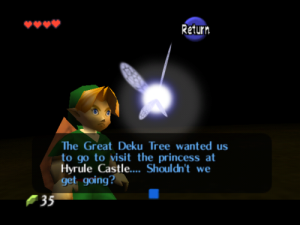 Audio – Use audio to warn players away from dangerous areas or to entice them to others. The Lost Woods section in Ocarina of Time made excellent use of audio cues to guide the player through the maze.

Visual Distinction – Many games have themed worlds, which not only break up the gameplay and can present new challenges but can also guide the player. If an NPC character has sent you on a quest to the desert and you’re surrounded by snowmen, you’re likely to have gone the wrong way.

Whatever game you make, deciding how you guide the player will be part of the design. While you don’t want the player to become lost, you also don’t want them to be overloaded with options. The player needs to feel in control, so use gentle nudges to guide your players rather than sticking them on rails. Unless that’s what you’re designing.

Games designer, Newcastle fan and prolific tea drinker
View all posts by Adam →
This entry was posted in Design Discussion, Social Games, The Legend of Zelda and tagged Games Design. Bookmark the permalink.